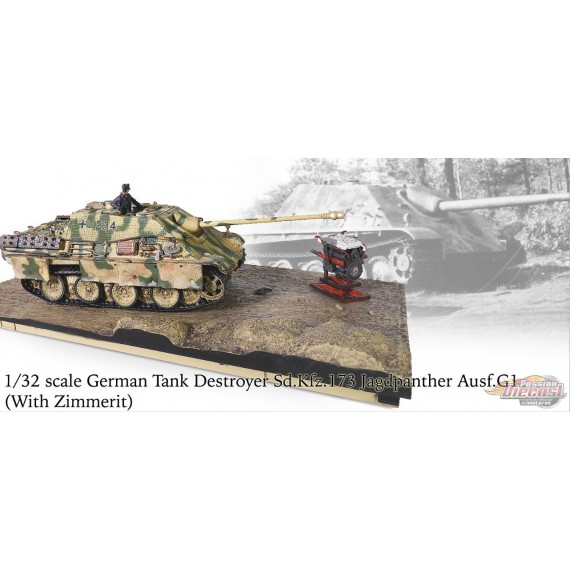 is available for PRE-ORDER: The estimated arrival date is September 2020. The dates of arrival are subject to change. because the manufacturers review them frequently. It is better to do the pre-order alone because we do not do two deliveries.

The initial designs for the Jagdpanther were created in the fall of 1942. The purpose was to mount an 88mm Pak 43 gun on a self propelled vehicle. The Panther chassis was chosen and the armored plating configuration was changed. Approximately 420 units were produced in 1944.

First built in Nazi Germany in 1944, the Jagdpanther was a 46-ton tank destroyer powered by a 12 cylinder gasoline engine and operated by a five-man crew. The driver had a periscope and vision slots and additional periscopes were mounted on the roof of the superstructure for the commander and loader. Its "no turret" design was built on the chassis of the Panther tank. It carried an 88mm gun and was protected by heavy sloped armor. The outcome of this design was a low-silhouette extremely high quality vehicle with tremendous firepower that many historians believe to be the best tank destroyer of the war.

Forces of Valor" vehicles have these characteristics:

No customer reviews for the moment.

Shop your diecast by brand

Get your passion For diecast back

The place in Canada to buy Diecast Model Cars and Airplanes

Passion Diecast specializes in miniature car collection, as well as civil and military aircraft we also have a wide variety of retro metal sign and decorative object for your man cave.

View all products Visit our store

to Canada and USA